My role: Project manager & UX Designer
‍
Primary and secondary research, concept direction, low-mid-high fidelity prototyping, mid-hi fi wireframing, concept strategy
context--
20 weeks, 2019
SCAD UXDG senior capstone project
the challenge --
When living in a city, it’s difficult to feel like any one individual can make a difference. While most people possess some innate desire to do good within their local community, it’s challenging to know where to begin. There lacks a streamlined and focused way for community members to turn digital engagements into real-world, actionable good.
How might we inspire and empower citizens to make a productive and tangible difference in their local community?
solution --
Flyer is a platform that connects community members to local non-profit organizations in a way that is personalized to the interests and needs of both parties. Regular users of Flyer can indicate what causes they are interested in and how they’d like to help out their community. Non-profits are able to be discovered based on what cause(s) they are tagged with and source different local volunteers based on their needs.
Who is Flyer for?
Throughout the creation of Flyer, we conducted several remote and in-person interviews with a mix of students, non-profit organization directors, and working professionals. 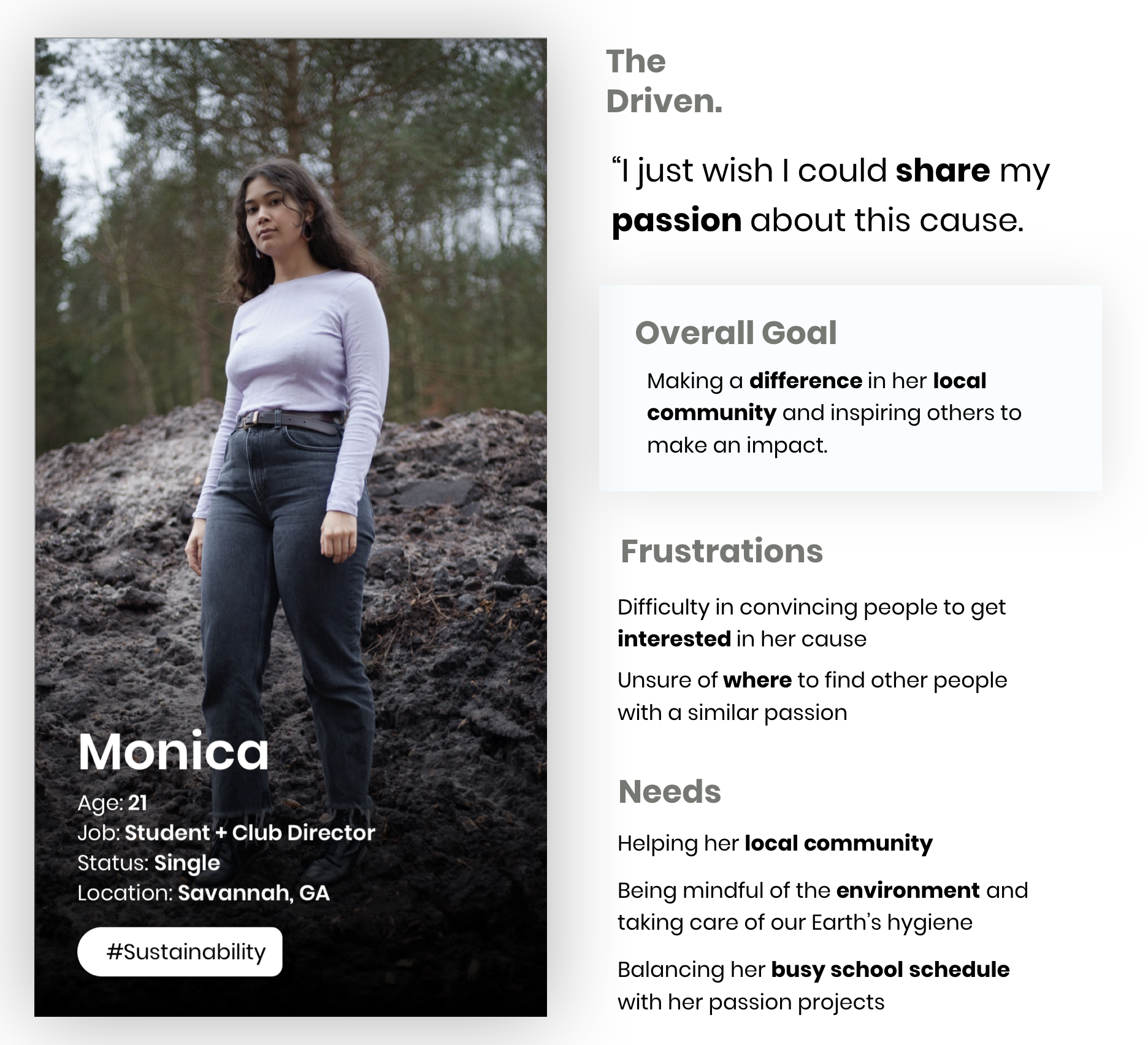 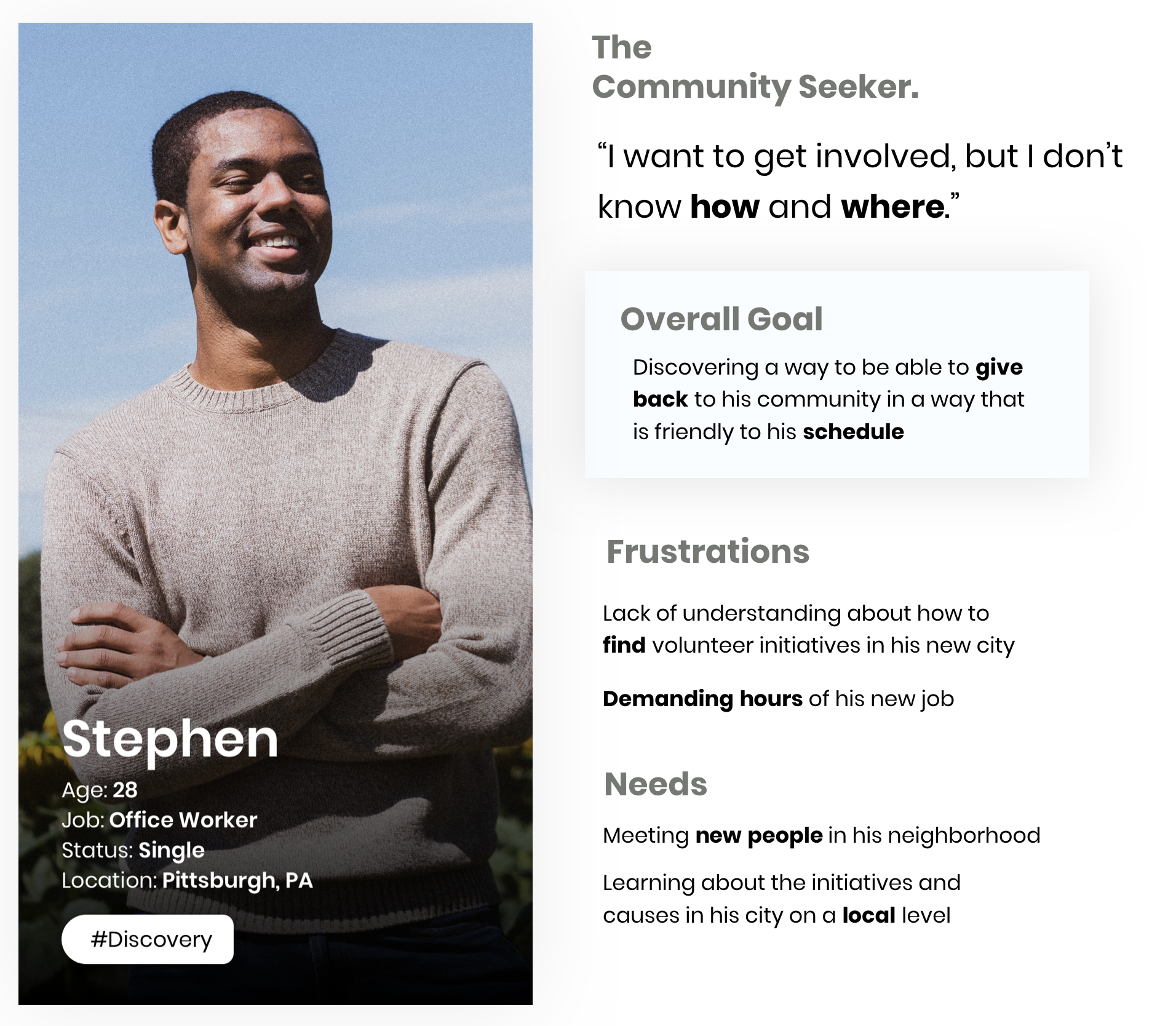 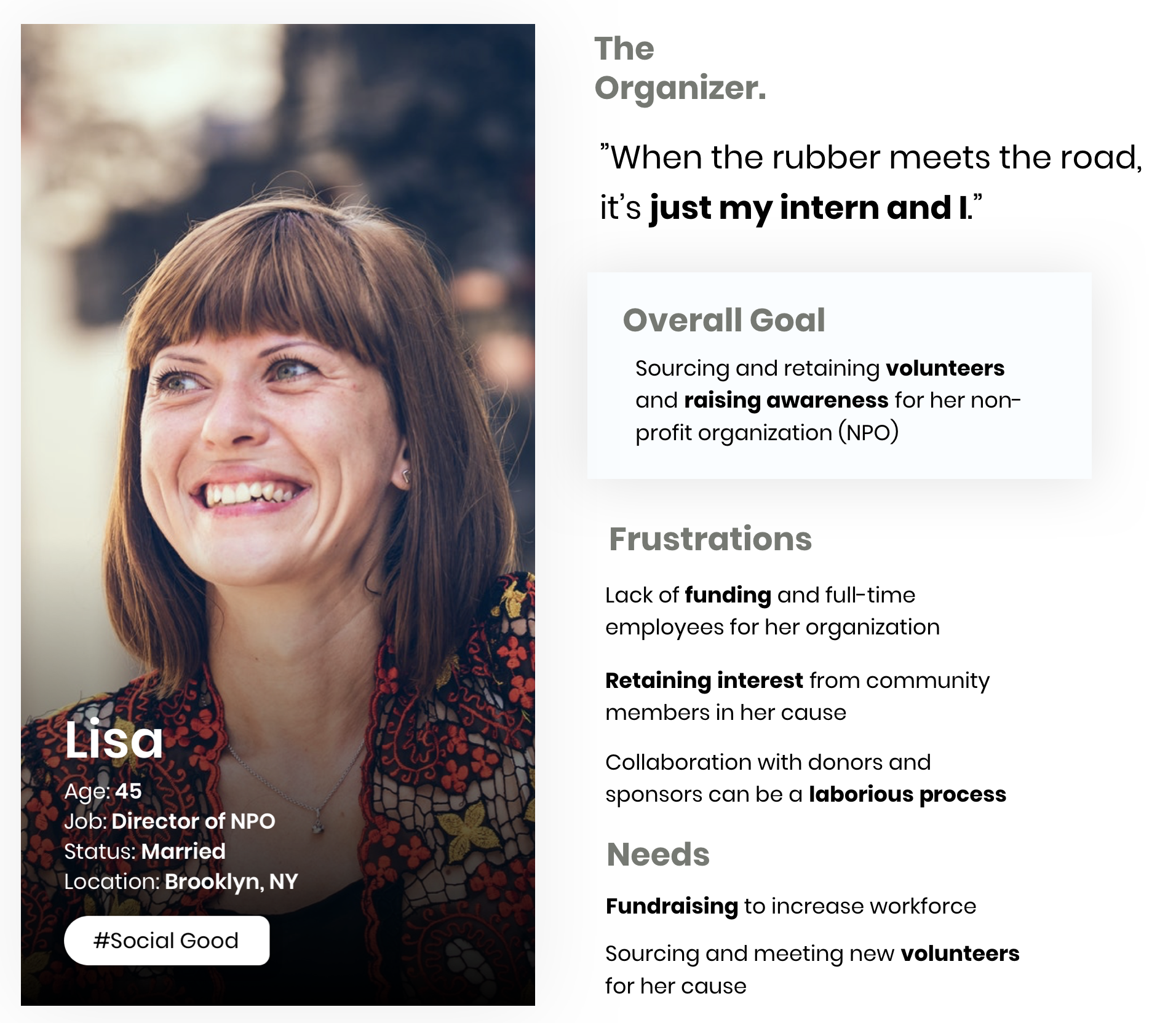 Flyer's capabilities were created with the needs of Monica, Lisa, and Stephen in mind.
The Driven
For someone like Monica, the Driven, a Flyer user can sign up and indicate their location, causes they're interested in, and a list of initial organizations to follow.

The Discover section allows curious users to explore new causes and organizations through Weekly Challenges (collections of volunteer events). Users can also collect badges to further incentivize their discovery efforts.
The Organizer
Lisa, the Organizer, is able to monitor their event information, keep track of volunteer requests, and their organization page analytics on the admin-side Flyer site. 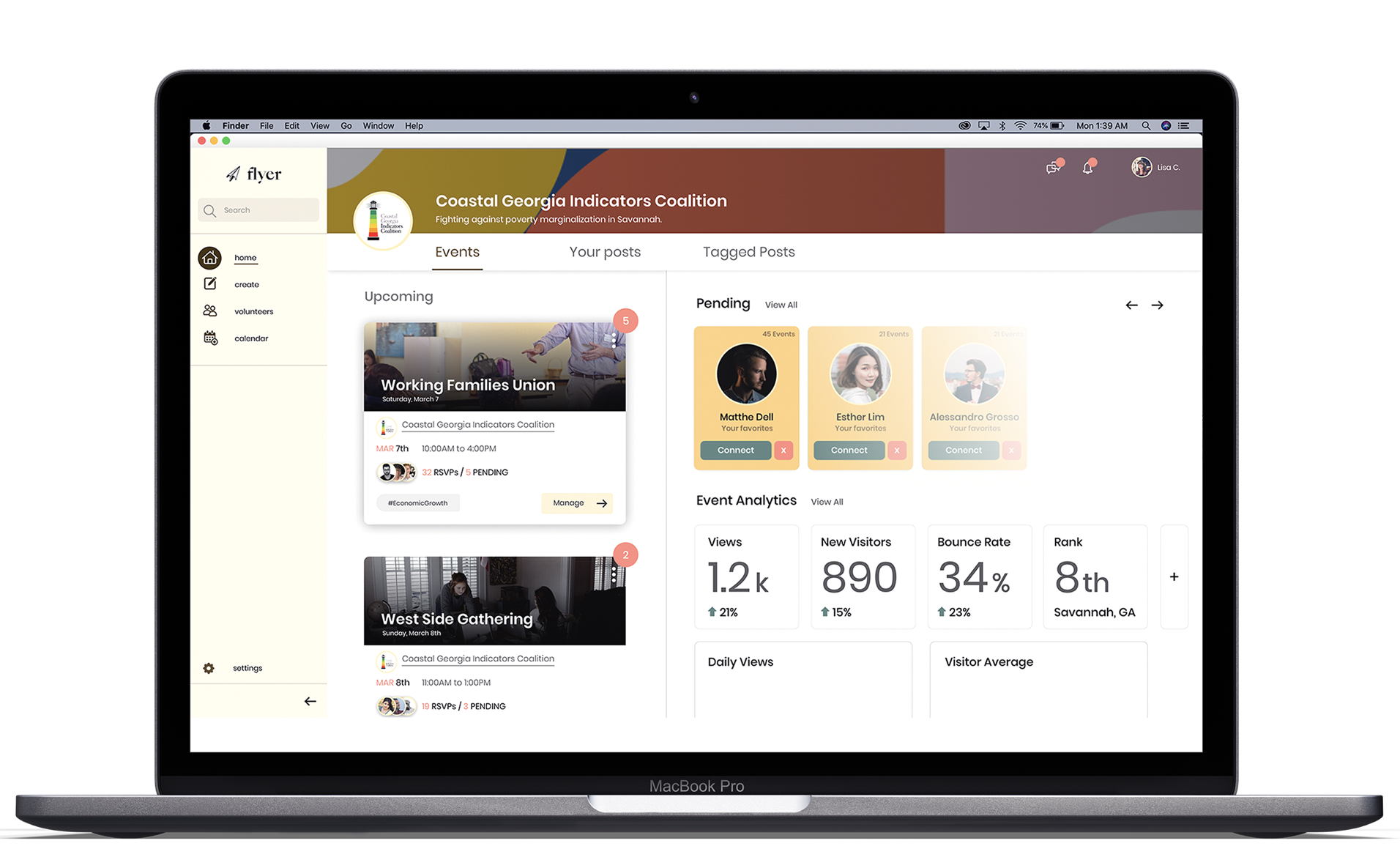 key features --
Onboarding -- understanding you.
During the initial setup of Flyer, users can indicate what types of causes they may be interested in to better curate their feed and experience within the platform.

Users can express initial interest in causes during their set-up.

Based on their location, volunteers can get started by discovering what local organizations are nearby.
Explore through the feed.
The feed page aggregates volunteer events based on what causes the volunteer has expressed interest in. Users can learn more about and contact organizations from their profile page.

Flyer users can discover local non-profit organizations and volunteer opportunities tailored to their interests in their feed.

Users can also view opportunities near them through a map view.
Do good, spontaneously.
Flyer users can also participate in platform-wide challenges through the ‘Discover’ section. Similar to a Spotify weekly playlist, volunteers are able to discover charitable opportunities and local non-profit organizations through participating in challenges.

Users are able to look through information about a cause, opportunities to help, and organizations focused on working towards the cause.

Check out our rough MVP on the Google Play Store: https://play.google.com/store/apps/details?id=com.flyerapp.flyer
process --
For UXDG 450: UX Design Senior Studio, we were challenged to create a project that would create some sort of holistic impact on human life. This class was split up over the course of two quarters or 20 weeks, with the first 10 weeks dedicated to research + concept development and the second 10 weeks focusing on development and implementation. 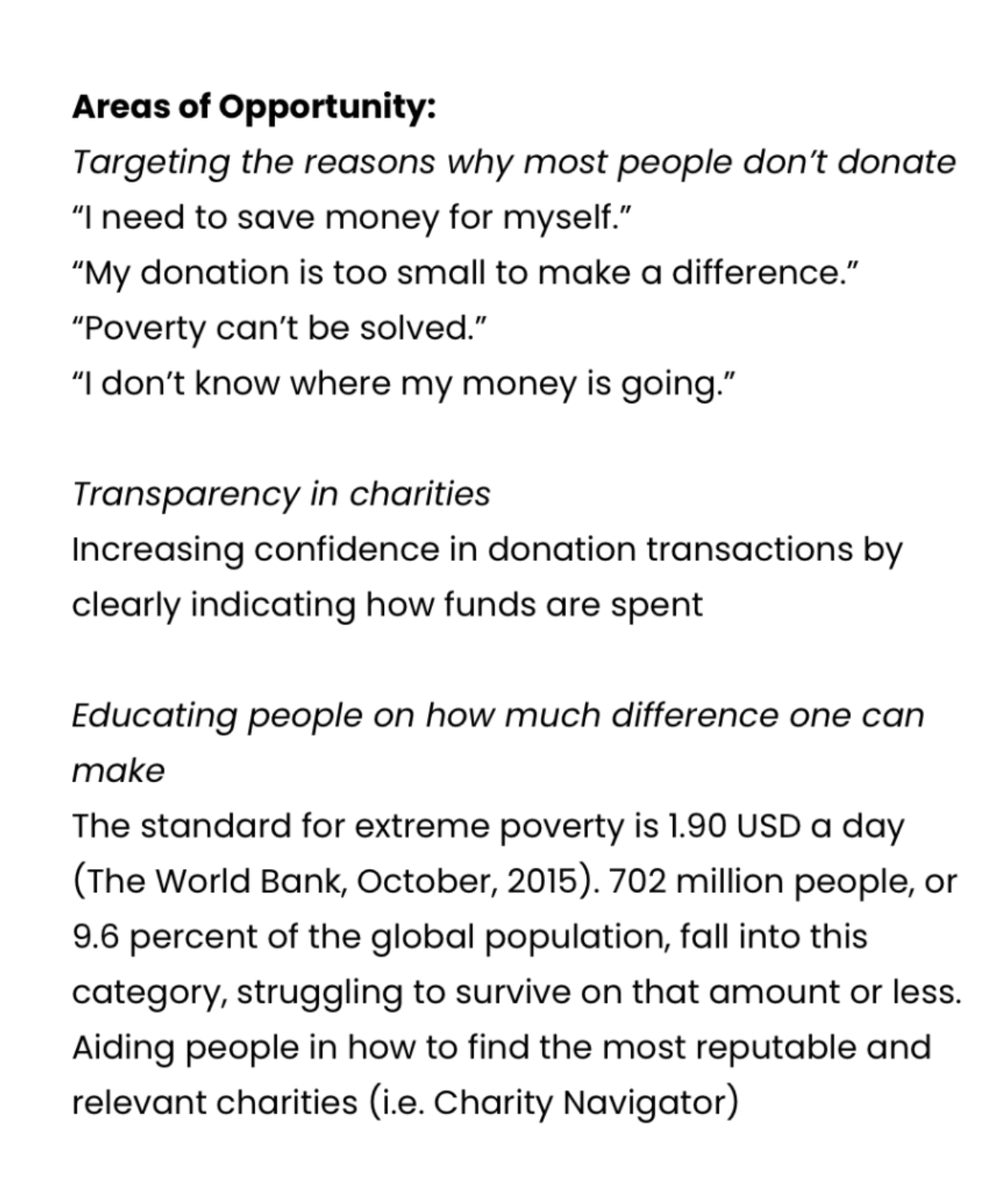 Secondary research
We began our initial research by exploring various potential areas of opportunity, notes, and sources surrounding the areas of communication and charitable giving. Upon our initial round of synthesis, we identified a few early areas of opportunity within the space: transparency in charities and educating people on how much of a difference an individual can make in their community.
Primary research

In conjunction with our secondary research, we interviewed a total of 36 different people from the age ranges of 15 to 51 years old to uncover unmet needs, desires, and frustrations regarding our two topics. In order to help guide our interview protocols, we identified a few overarching goals on what we wanted to discover through our research. 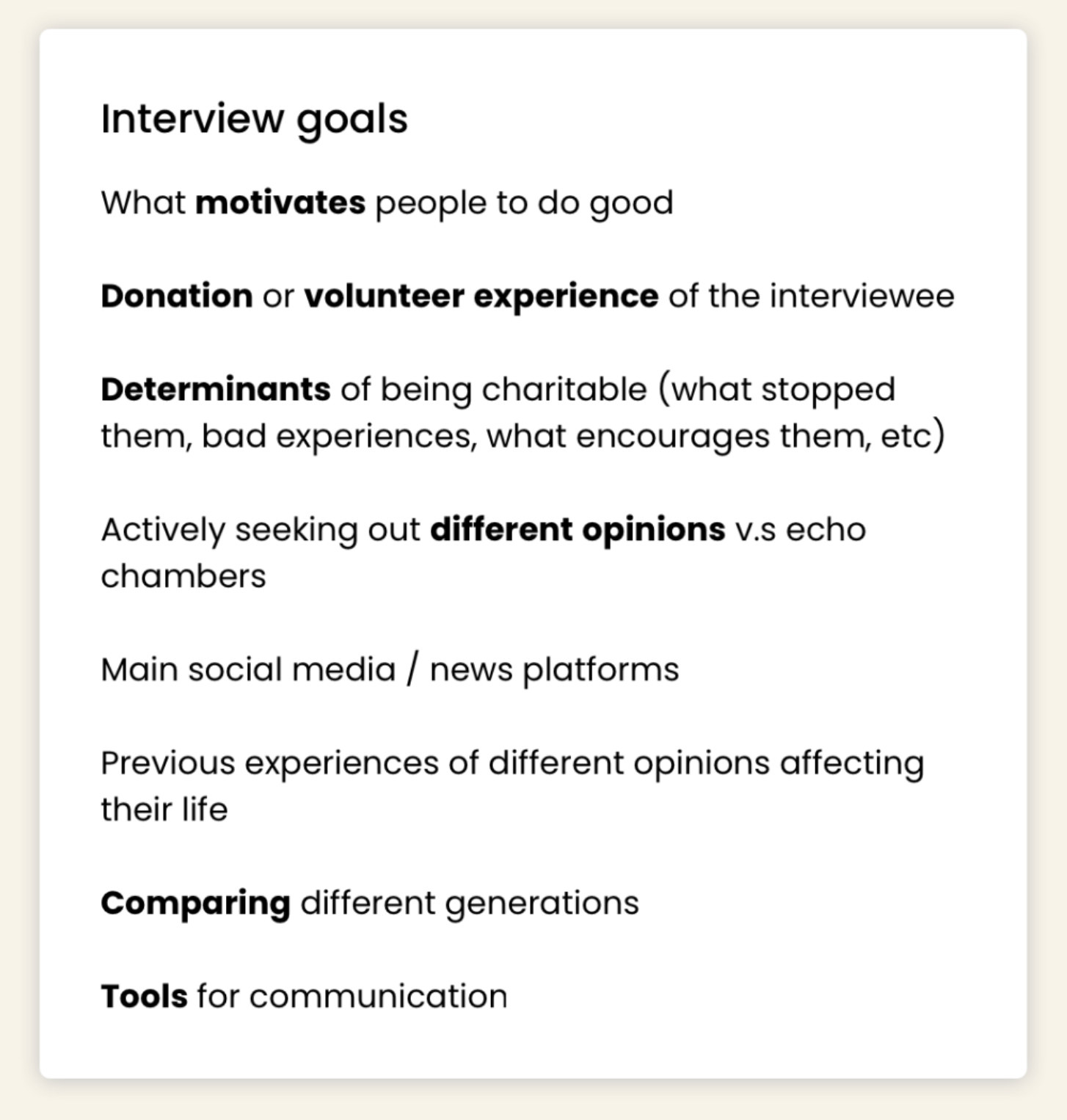 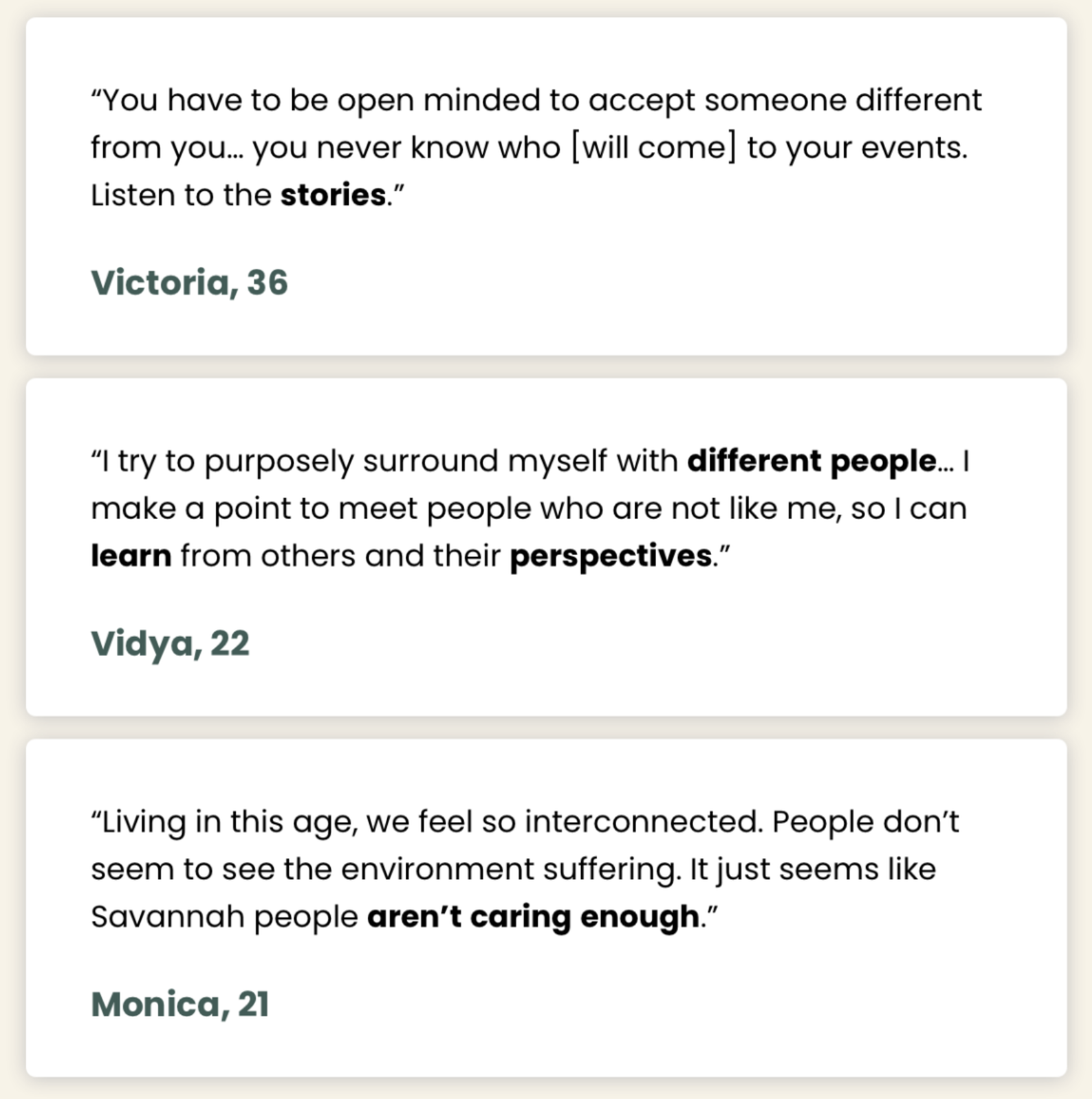 affinitization --
After conducting a few rounds of secondary and primary research, we had generated a substantial amount of data points to synthesize. The general insights extrapolated from these data points helped guide our team’s direction for the next steps towards ideation.
Synthesis

From these 233 data points, we grouped those stickies into clusters of 34 different pink sticky notes, each with a general statement encompassing the group’s overarching insight. From those pink sticky notes, we further grouped them into 9 more clusters and generated a “How Might We” (HMW) statement from each of the 9 clusters. These HMWs served as clear and actionable areas of opportunity that we could pursue during ideation. 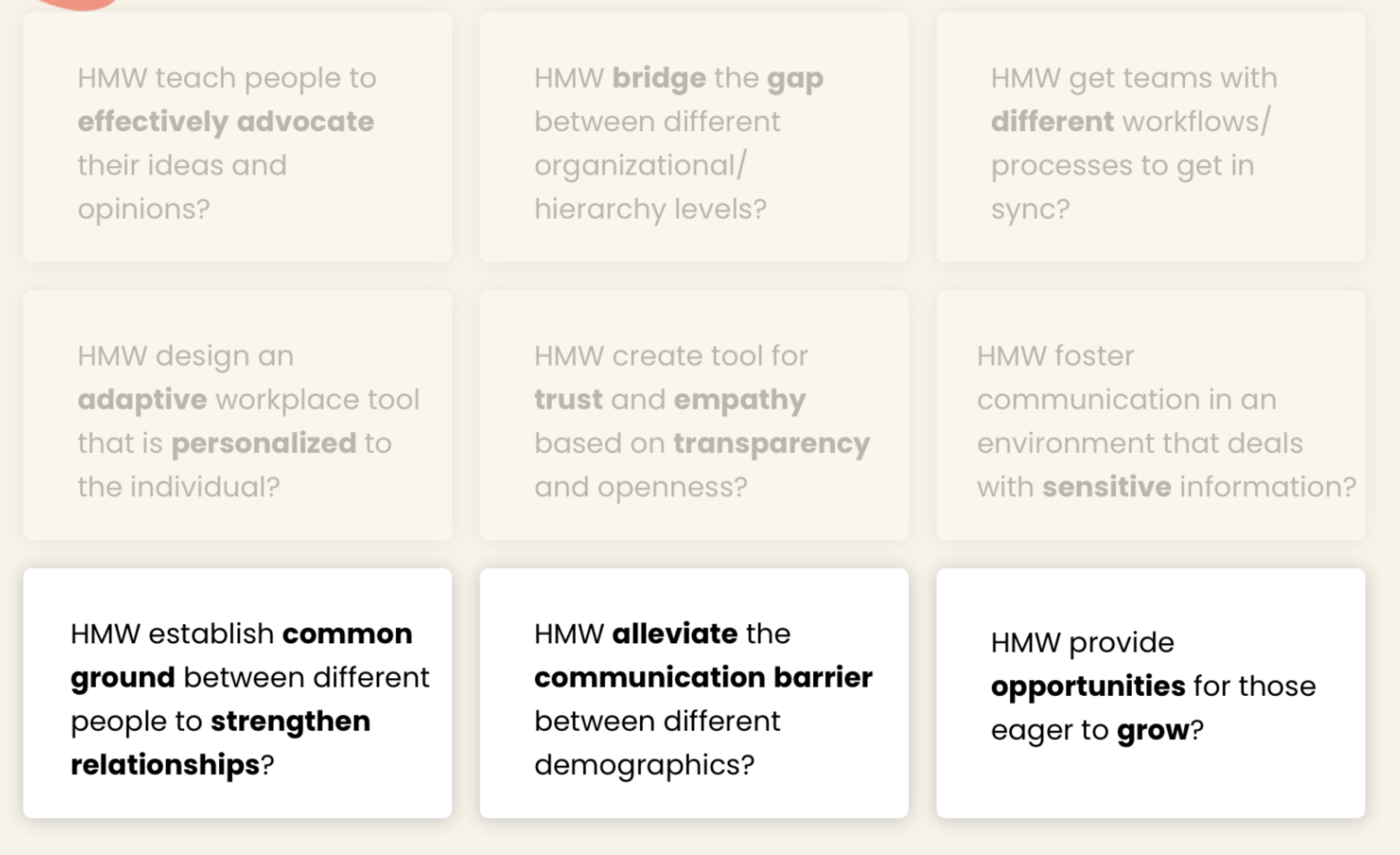 From the 9 HMW statements, we decided to focus on three:
How might we establish common ground between different people to strengthen relationships?
How might we alleviate the communication barrier between different demographics?
How might we provide opportunities for those eager to grow?
research phase 2 --
Once we had decided on a clearer direction to pursue, we jumped into a second phase of more targeted research with competitor analysis, surveys, and more interviews.
Competitor analysis 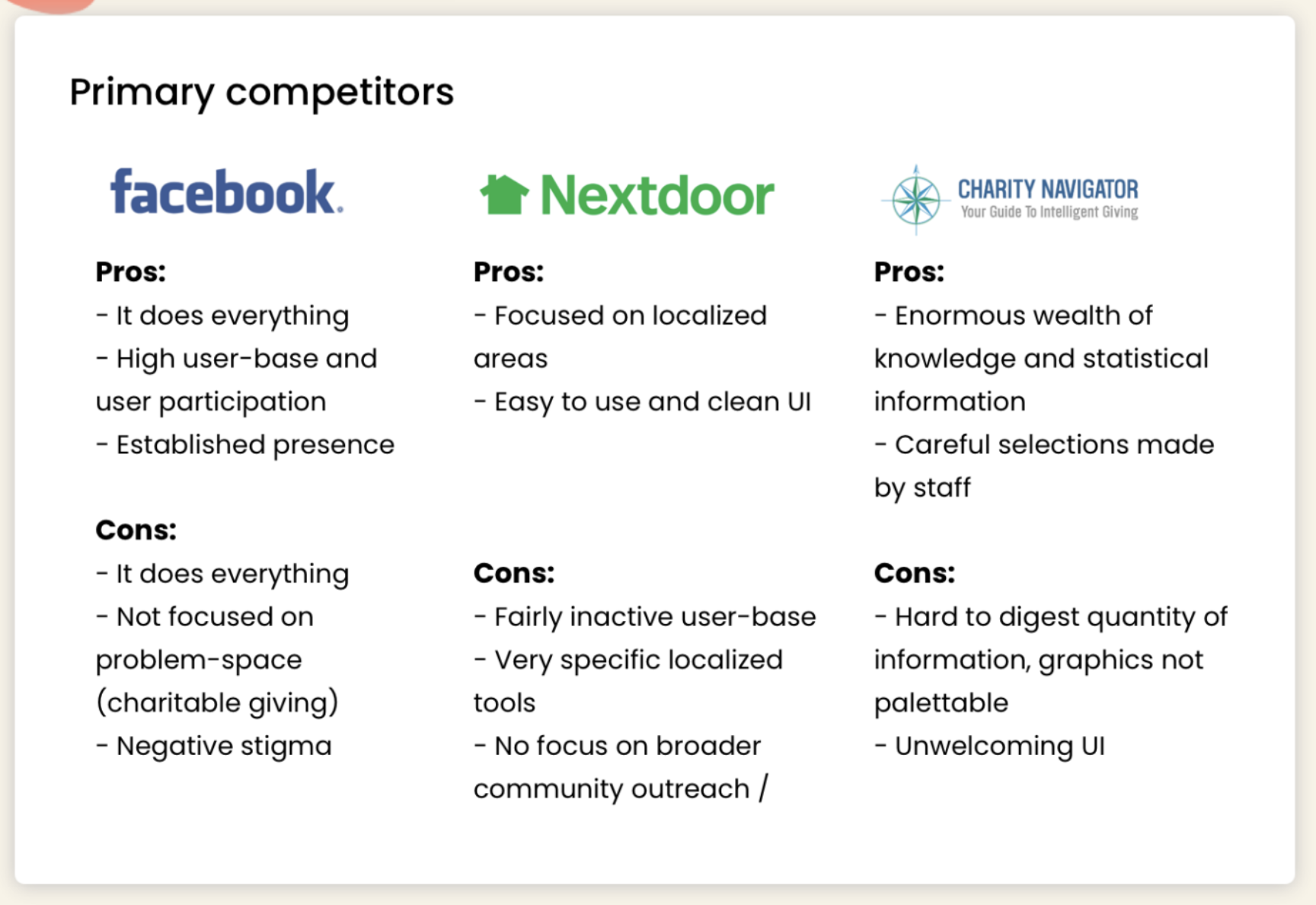 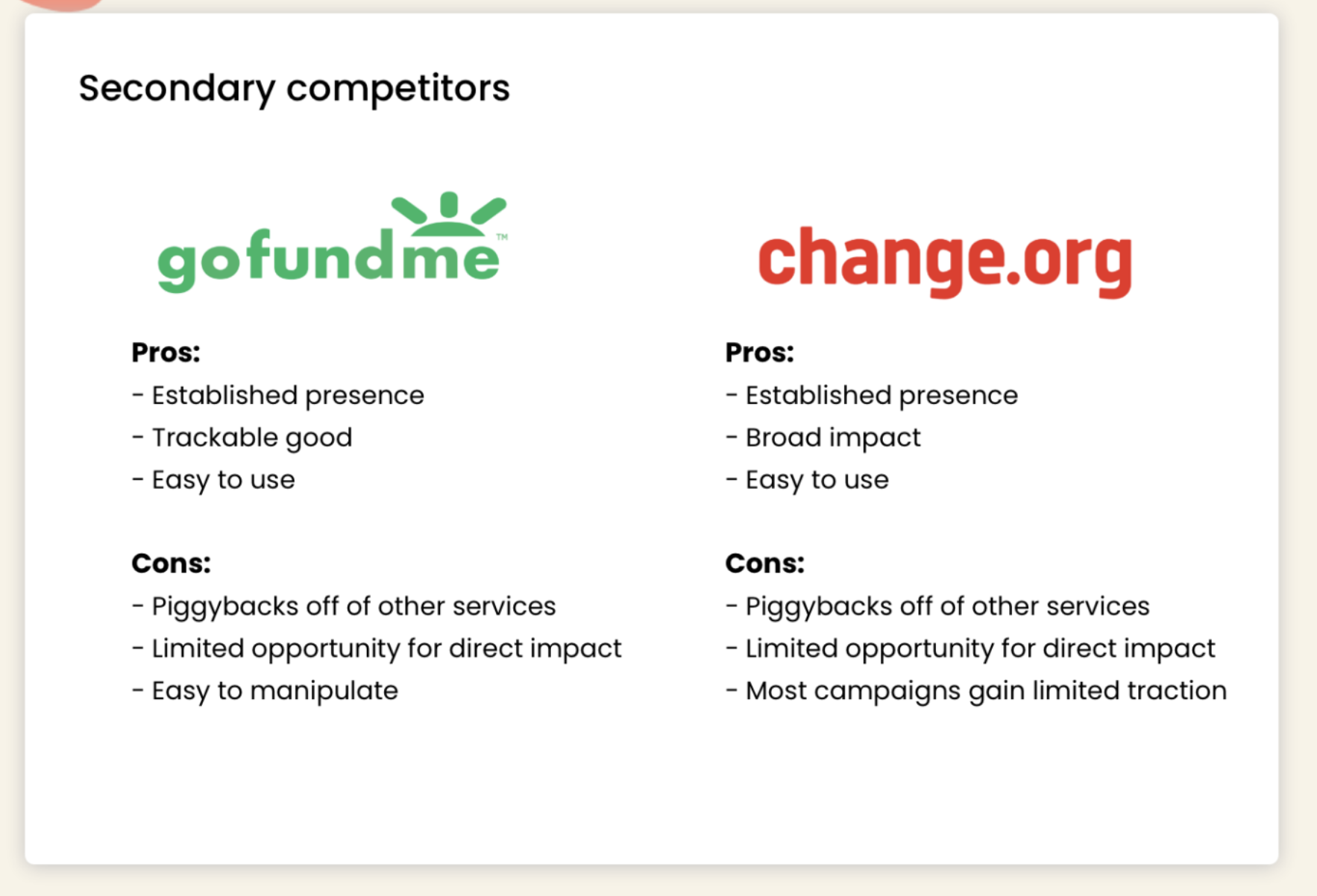 We separated the space of different existing products by primary and secondary competitors in order to identify what already existed in the market and to analyze the best area of opportunity. From the competitor analysis research, we mapped out a spectrum of different products in the market from broad to focused and feature light to dense.

The region we found the most lacking was a product or service that was extremely focused to charitable work while also being quite feature dense. 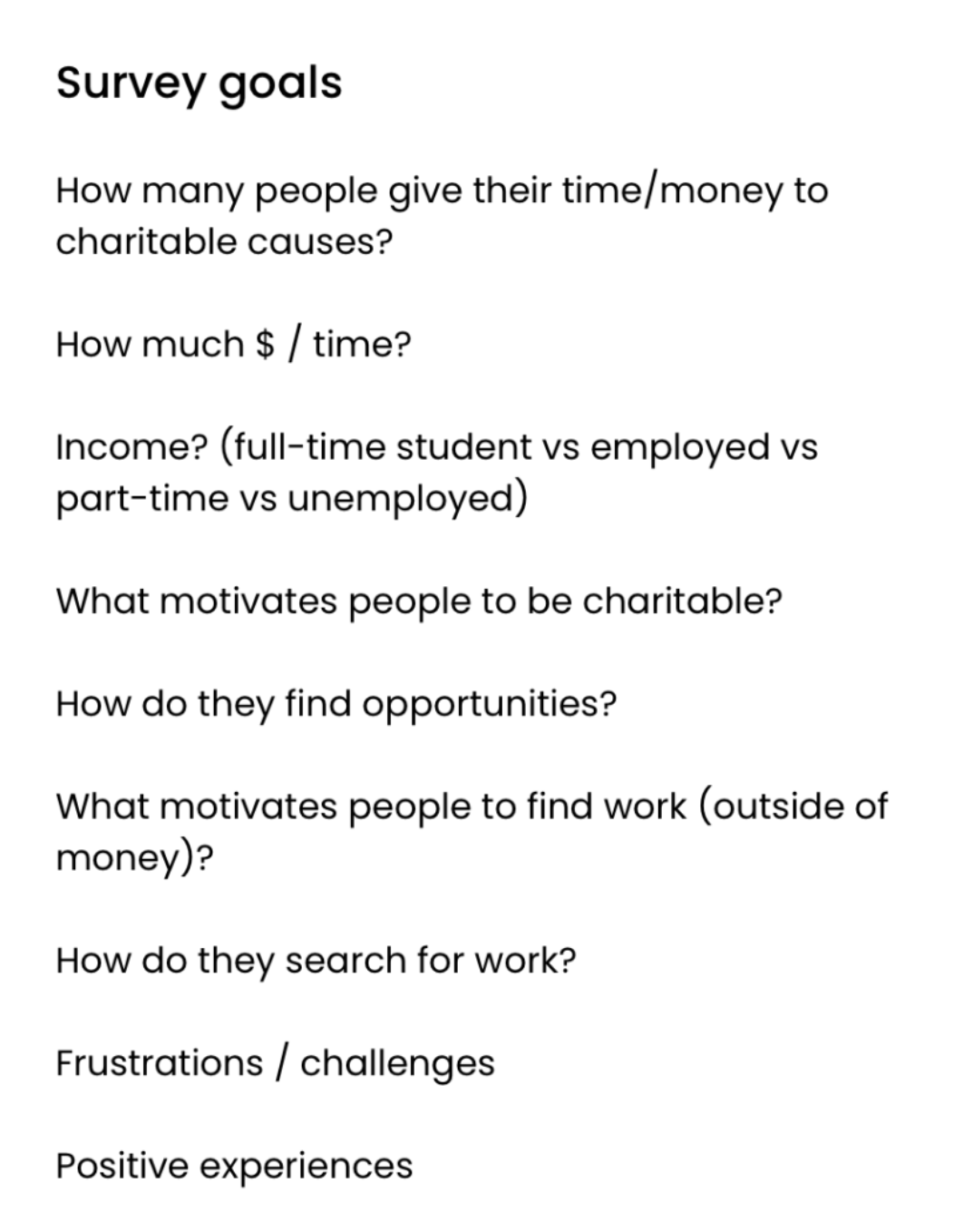 Survey
In order to discover more needs, frustrations, and motivations that we were not already aware of, my group created a general survey outlining questions about charitable giving.

Concept validation interviews
We also conducted a second round of interviews with more targeted goals and questions specifically pertaining to our direction of charitable giving and community engagement. At this point, my group had split our main idea into two different versions with storyboards to illustrate each version. These two storyboards were shown to our interview participants to get feedback on which direction we should move forward on. 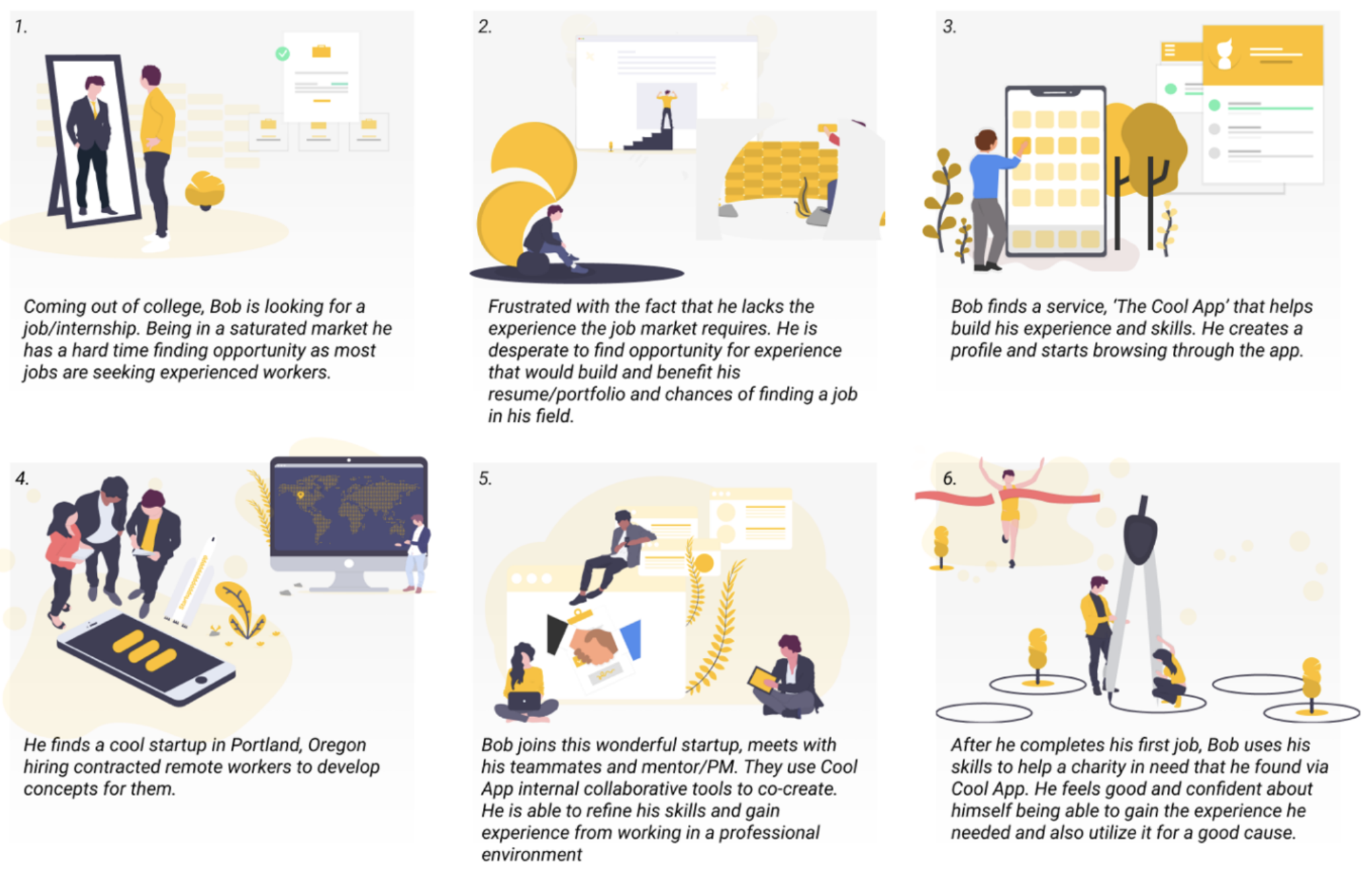 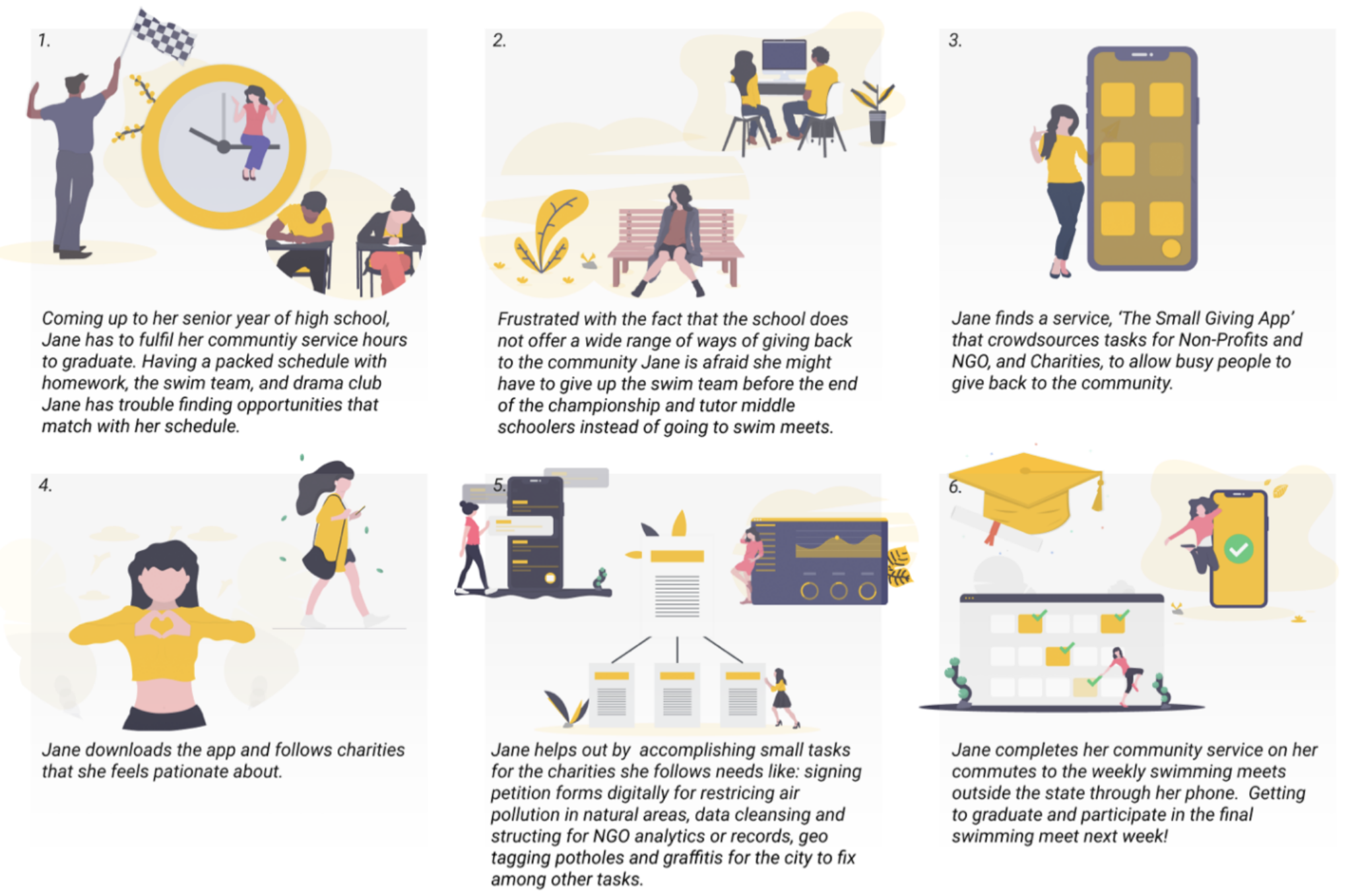 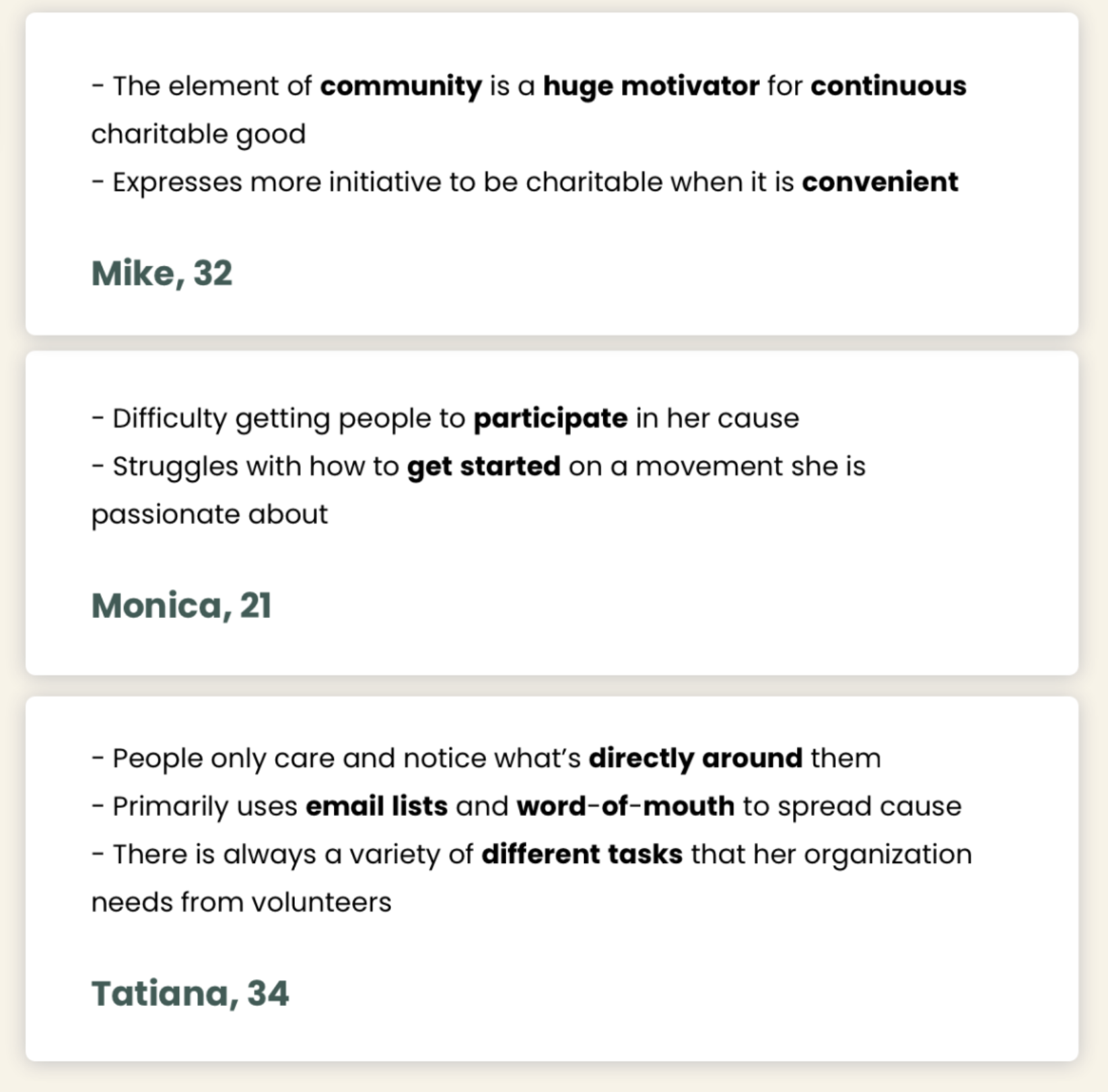 concept synthesis
At this point, we had consolidated the findings from our two phases of research about community engagement and charitable giving into a few key insights:
Key insights
1. Self and intrinsic fulfillment is a powerful motivator, as many people feel a desire for self growth and new perspectives.
‍
2. Available time and schedules are a huge factor for people when determining to act charitably.
‍
3. Transparency = trust, especially within charities and non-profit organizations.
From these learnings, we identified three high-level "pillars" of what we wanted to address in our solution.

Personas
From our research learnings and pillars, we created three personas to embody the needs, desires, and frustrations surrounding the pillars that we had found. 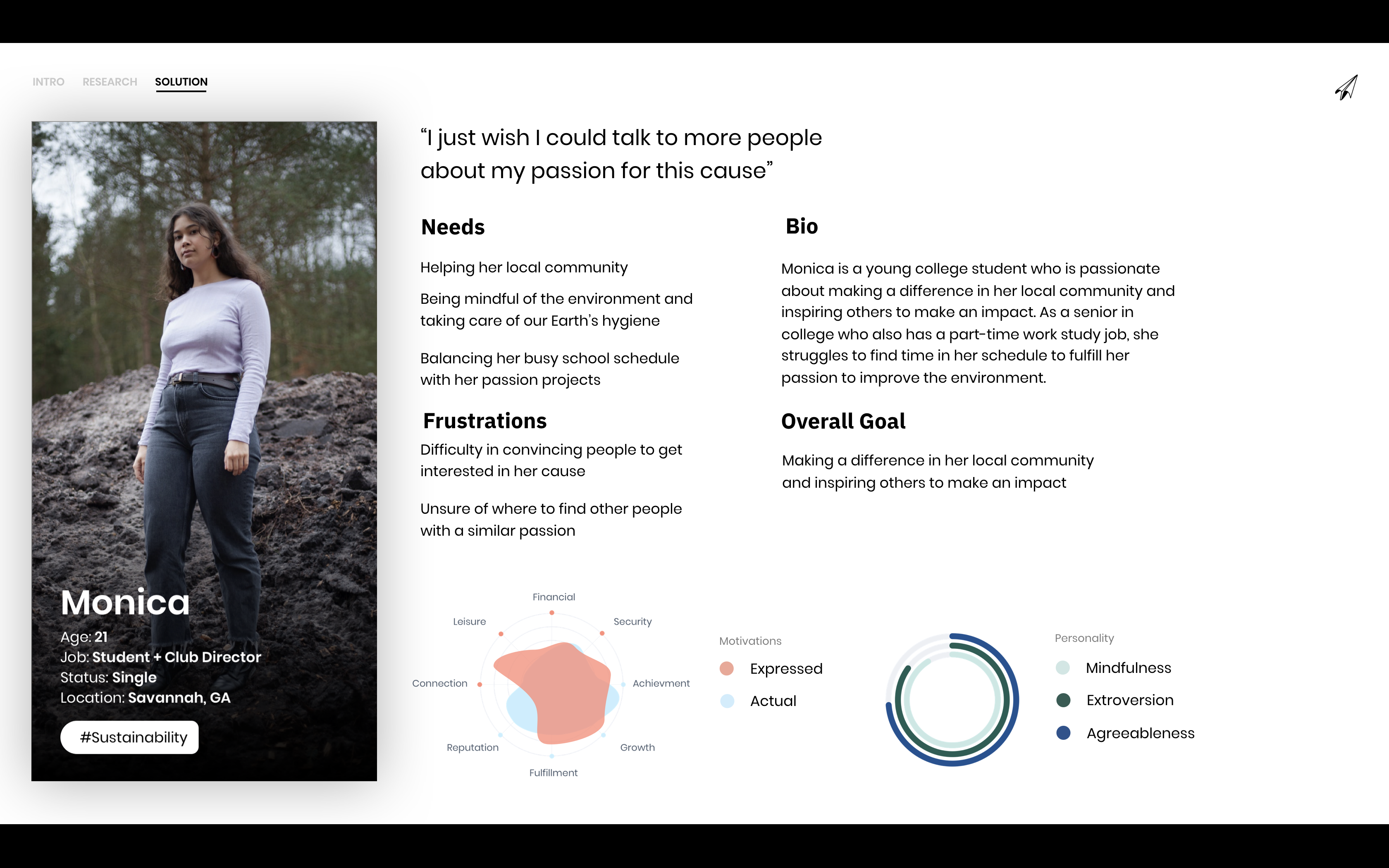 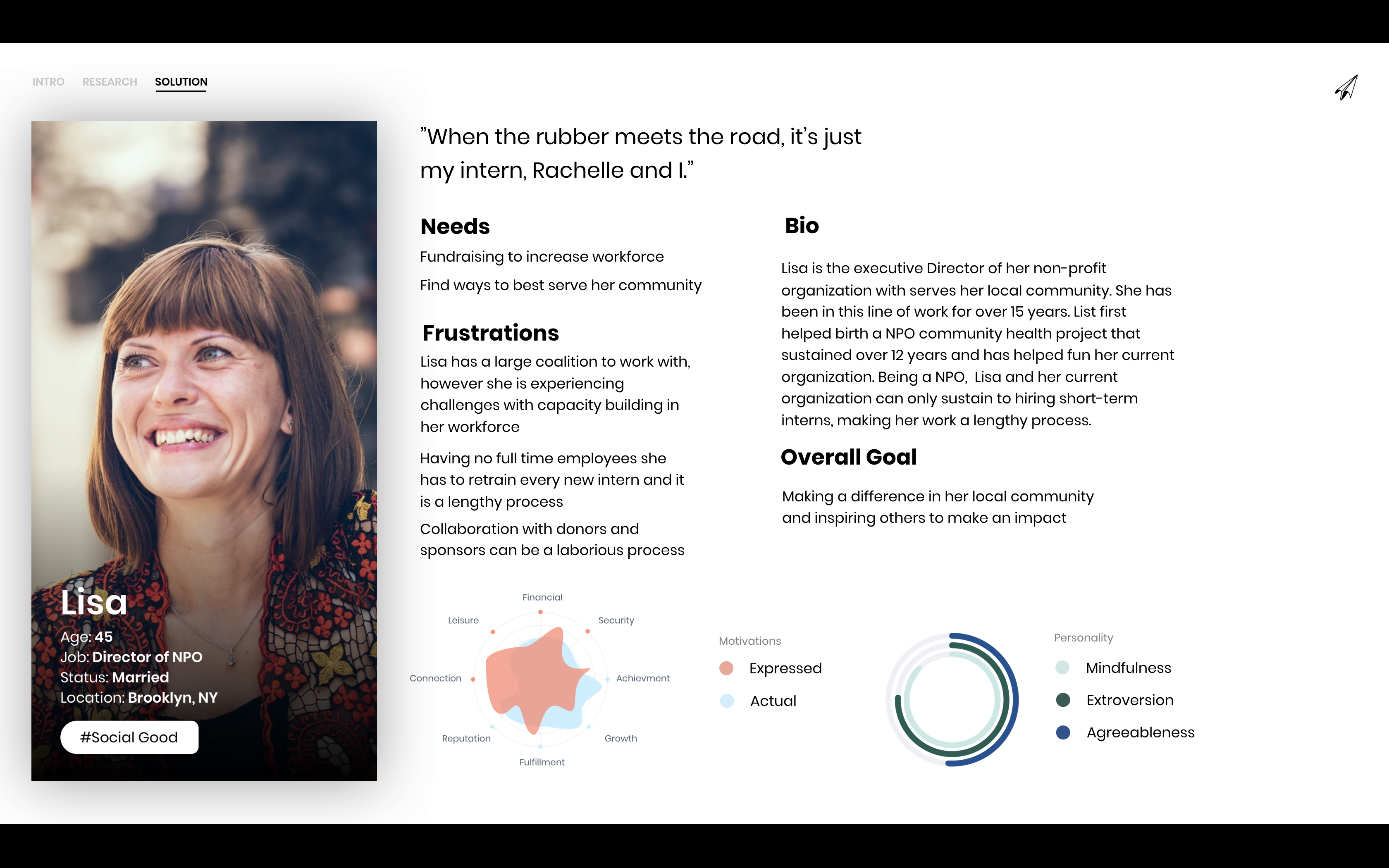 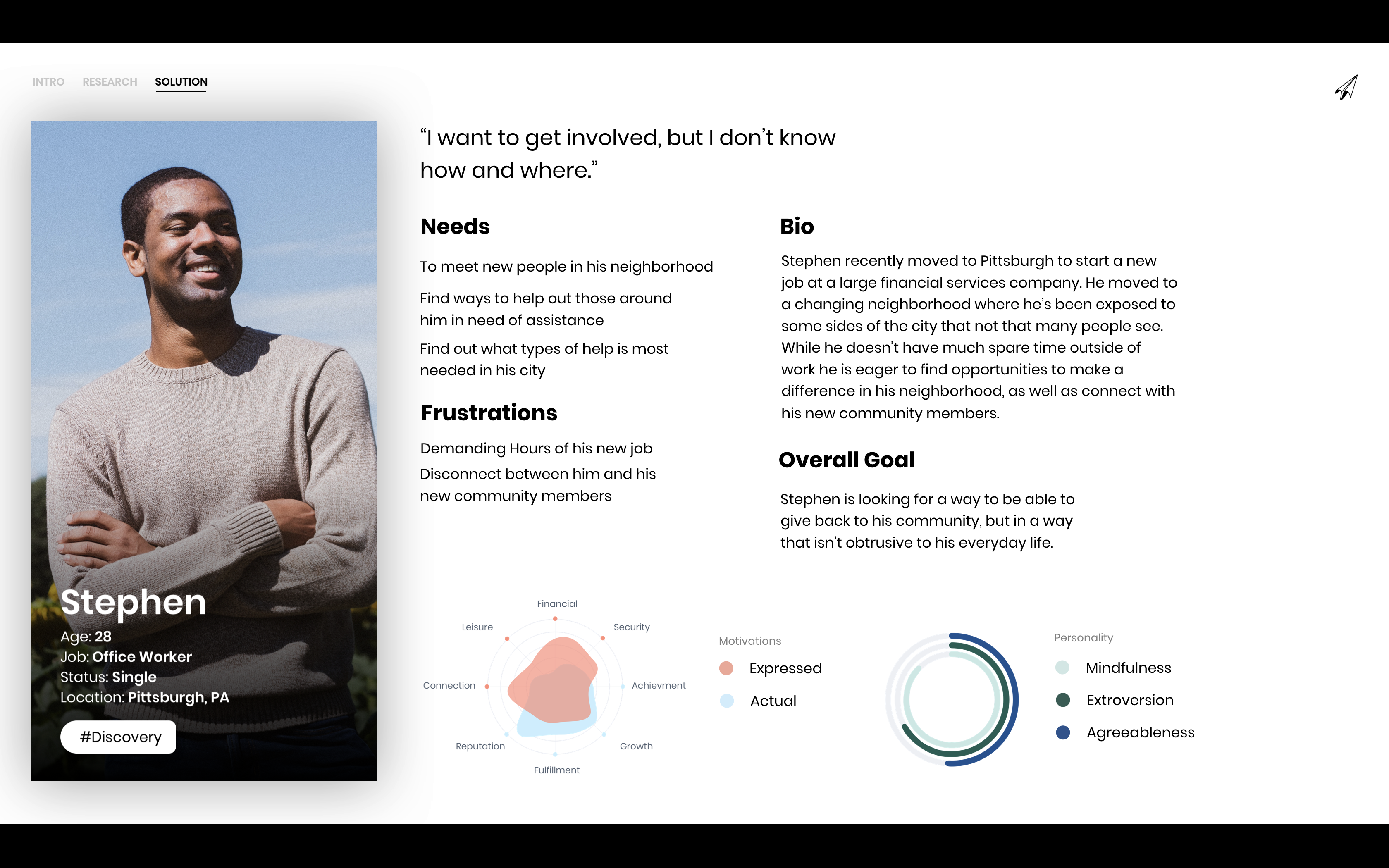 concept development and validation
Once we had a more solidified direction, we began to map out all of the potential functionality and information architecture for the idea. By listing out all of our possible features, we were able to identify and compartmentalize the main “pillars” of our ideas and see how the idea could materialize into a product.
Information architecture 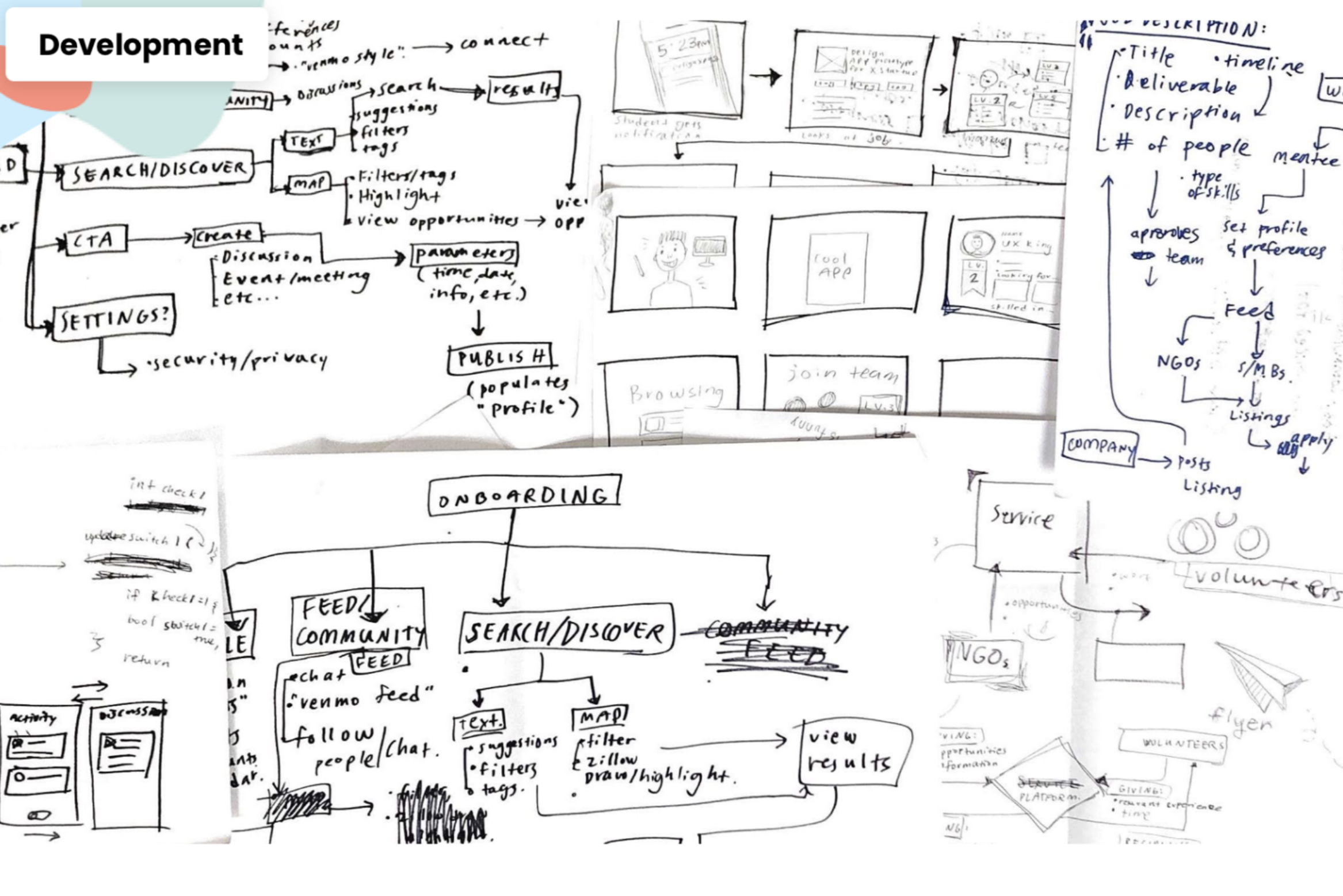 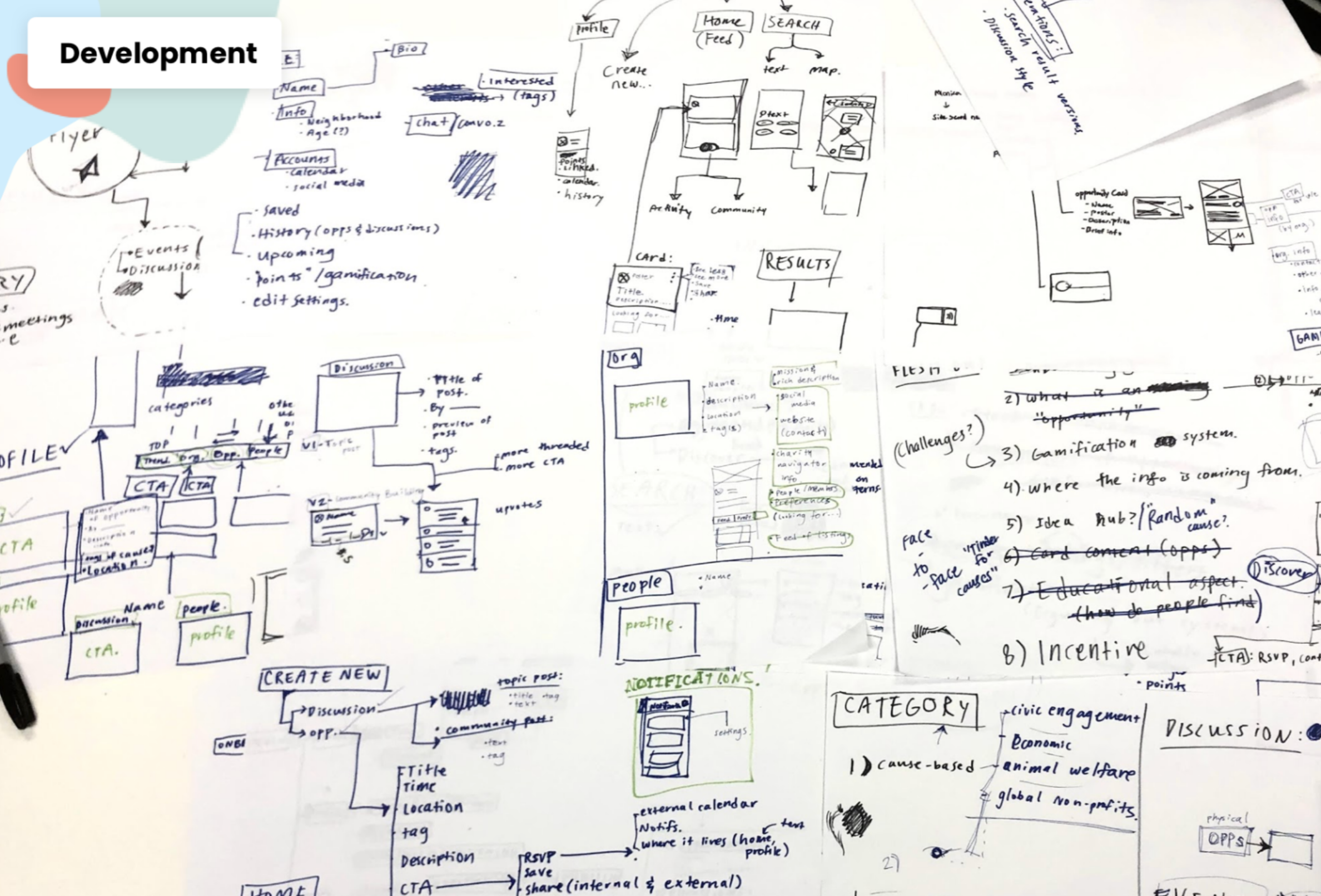 After we had a rough sitemap for our concept, we began to create wireframe iterations for how this app would manifest itself.
User testing 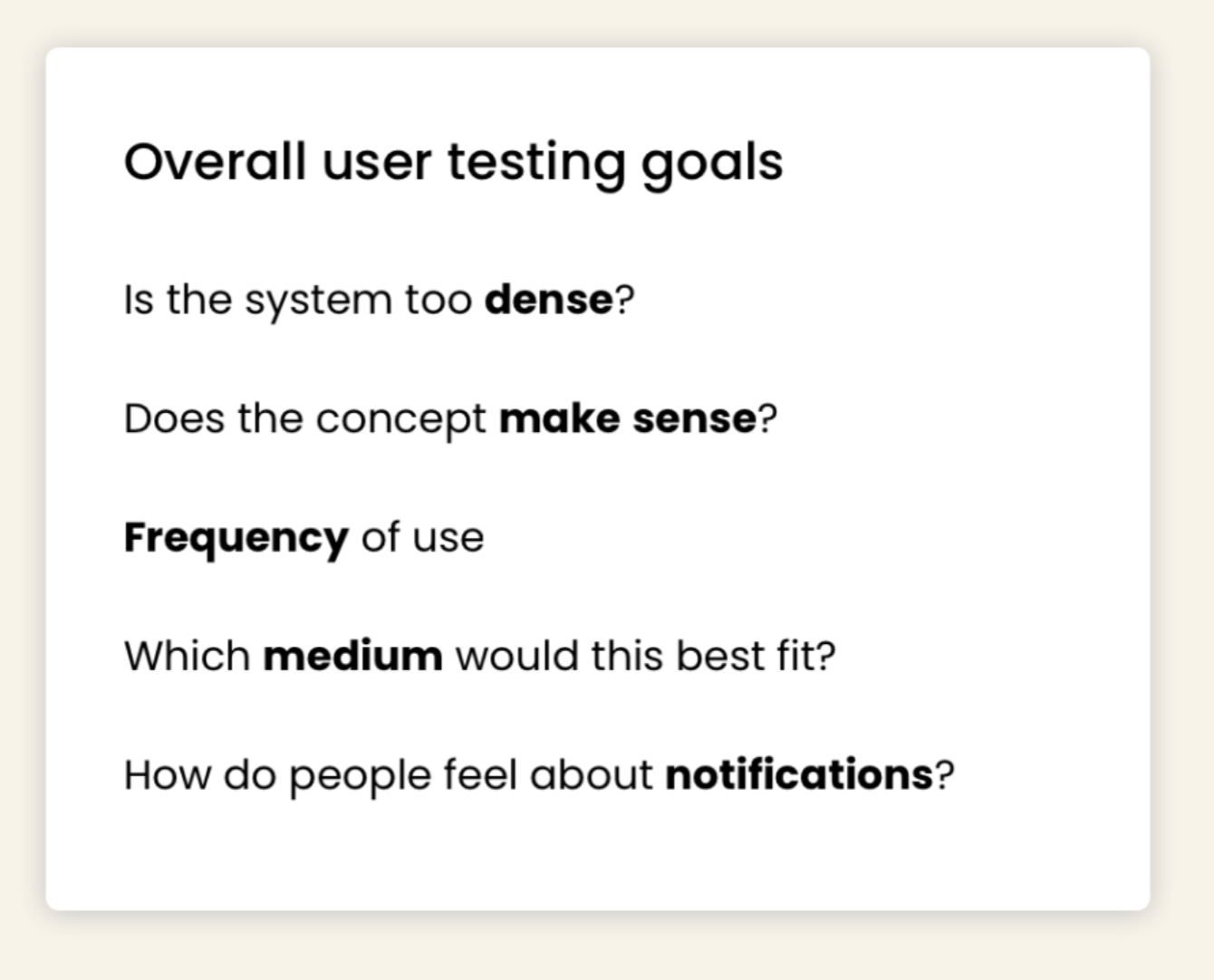 We conducted two rounds of user testing with the low and mid-fidelity prototypes that we had created. The 11 people we tested with ranged from students to N.G.O. workers to working professionals. In order to maximize the amount of relevant feedback in our tests, my group established some overarching goals on what we wanted to discover during these tests.
Low-fidelity 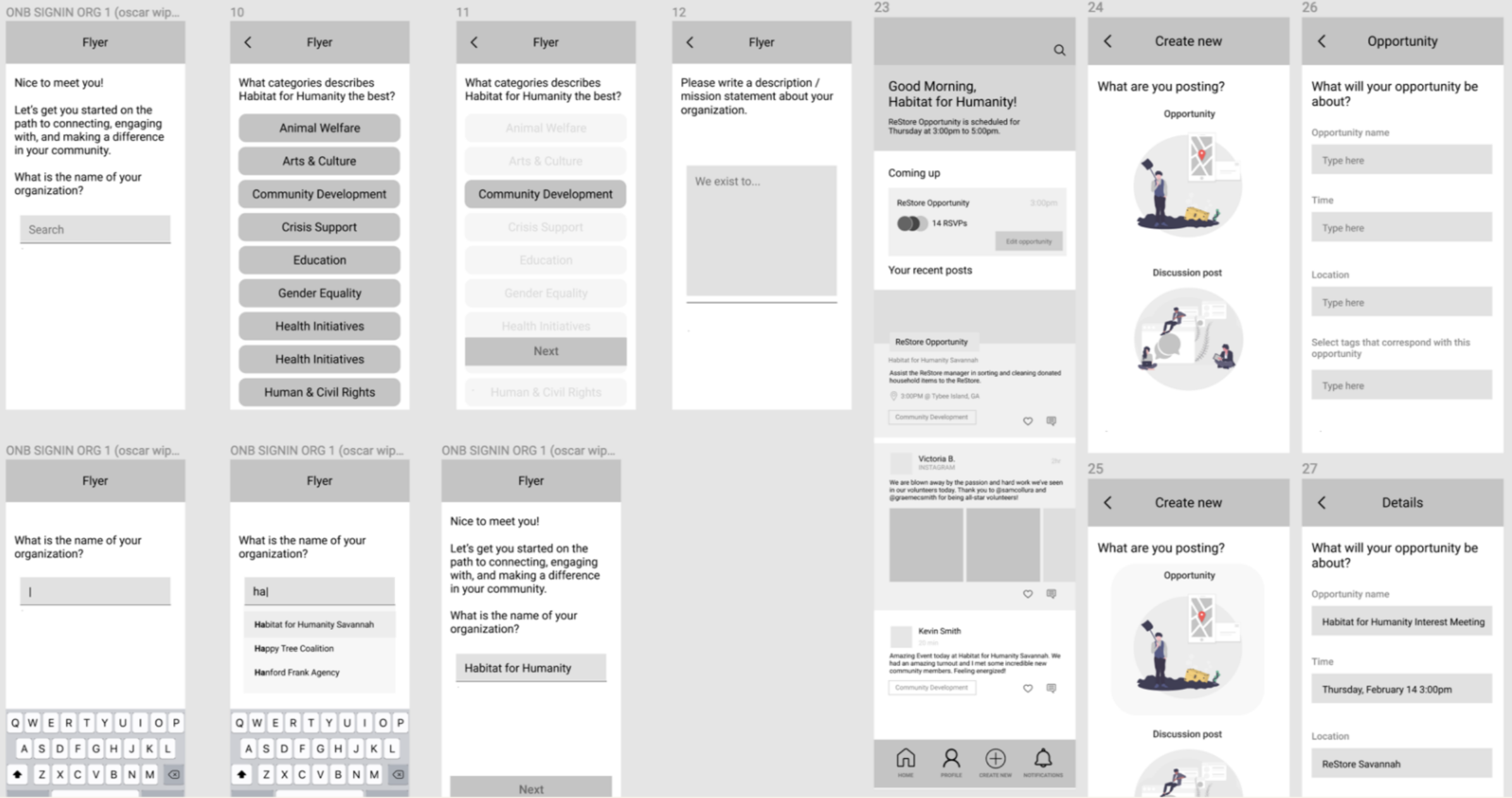 At the low-fidelity wireframe stage, our primary focus was on feature navigation, information architecture, and mapping the concept at a high level.
Mid-fidelity

After the low-fidelity stage, we moved towards creating a mid-fidelity wireframe flow with the focus of establishing a more finalized interface and system architecture.
User testing insights 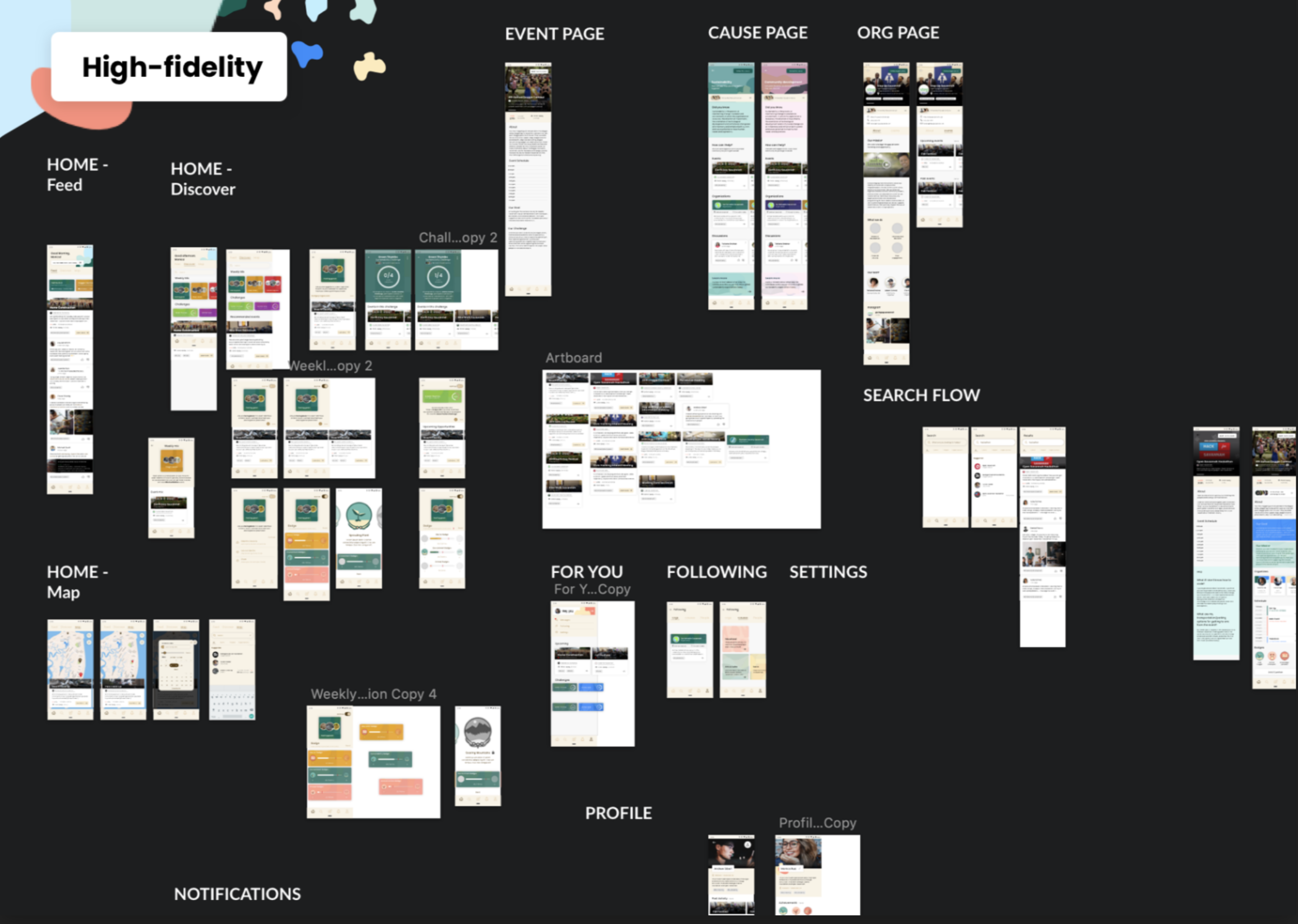 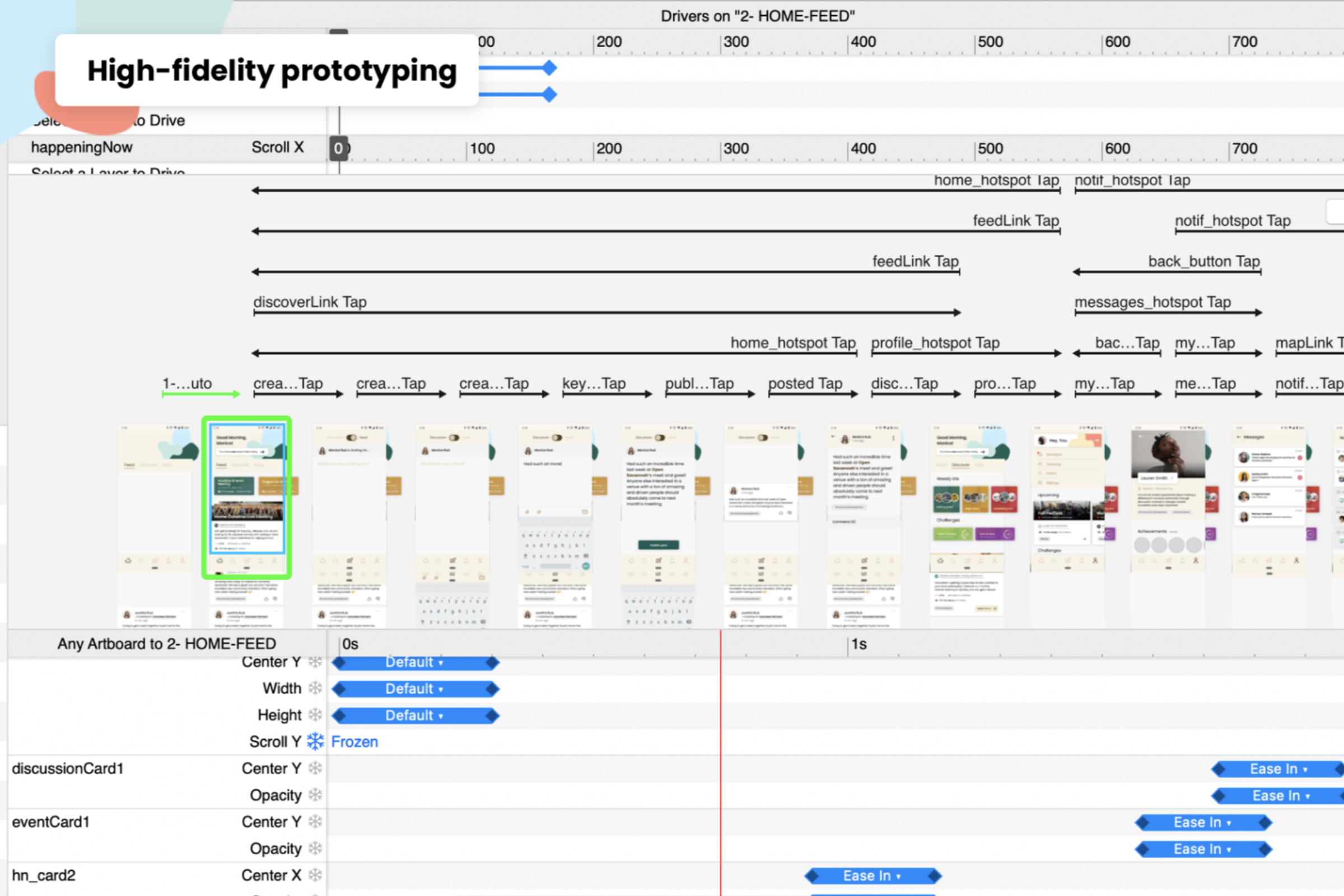 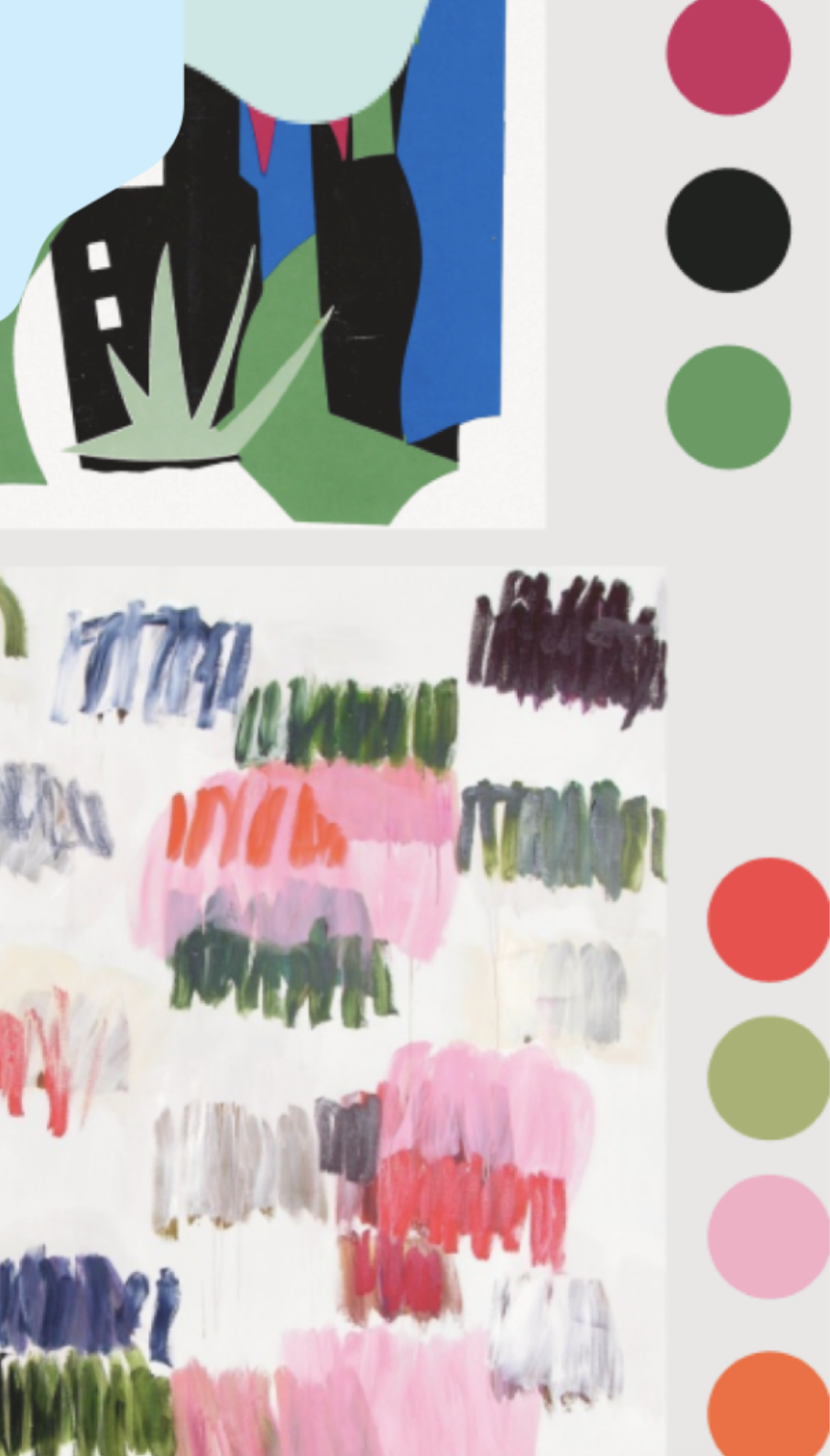 In conjunction with our wire-framing and prototyping process, we began to establish a visual system to be able to be applied once our wireframe flow and prototypes were at high fidelity. The visual system consisted of mood boards, a color palette, typography, and repeating components such as cards, tags, and pages.
Bringing back the "why"
It’s easy for people to feel like they can’t make a difference.

When living in a city -- whether it be as large as New York City or as small as Savannah -- feeling like you can’t make a real, tangible difference as an individual is common. If there is anything illustrated by the non-profit organizations we’ve spoken with, the reality is that a small group of people coming together with the same passions can create a ripple effect that has real potential to make large-scale change. With Flyer, we hope to create a product that instills empowerment, inspiration, and passion into citizens to be able to make tangible impact in their community.